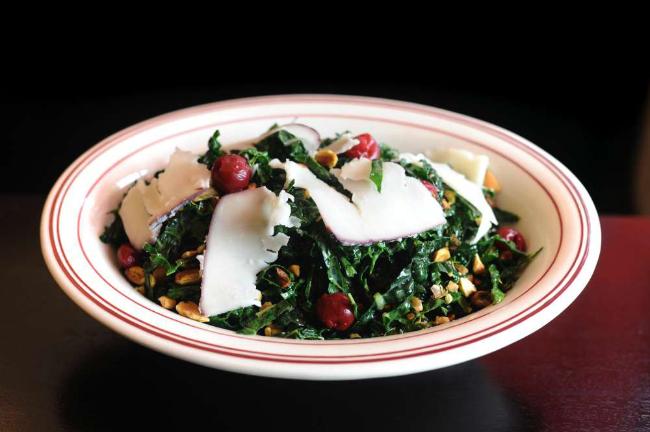 Tune out the ice cream trucks this summer and channel your inner green goddess with one of the dining scene's hottest vegetables: kale. Most people think of kale as a fall and winter vegetable, but lately the leafy green has become so popular that many eateries offer it year-round.

Why hail kale? Whether it's curly, Tuscan or Russian, the vegetable is a bona-fide superfood that is a powerful source of antioxidants like vitamins A, C and K, as well as minerals like iron and potassium. Kale is particularly rich in vitamin K, which is known to reduce the risk of cancer and is also highly anti-inflammatory. It's surprisingly versatile, and easy to throw into soups, salads or roasts.

Kale is a tough, hardy green that doesn't wilt or fall apart easily, which means it doesn't get soggy or mushy when cooked. The slightly bitter, hearty and fibrous texture of cooked kale makes a wonderful side or starter. An added benefit of cooking kale is that it boosts the vegetable's ability to lower cholesterol and the risk of heart disease. And the kale boom means that it can be found anywhere, cooked or raw, from salads at cozy luncheonettes like Raymond's to smoothies to even desserts, like the kale cake from New York City bakery Waltzing Matilda's.

"People are starting to discover that kale is more than just an underliner for shrimp cocktail," said Jim Edwards, resident head chef at Chef Central in Paramus. "It's a nice clean background for a lot of things. It used to be used just for garnish, but it's very nutritious, very healthy and actually quite flavorful."

Frank's Place (560 Sylvan Ave., Englewood Cliffs) is a takeout lunch joint, and the eatery rotates kale sautéed with garlic and olive oil on its menu, much like broccoli rabe. Kale is a great substitute for greasy lunch sides like macaroni salad or french fries, and Frank's Place makes it easy to grab the green on the go. At Nobo Wine & Grill (1400 Palisade Ave., Teaneck), kale is braised until tender and mild, and served alongside roasted chicken breast and chestnut purée.

Kale works as a welcome change to mesclun and romaine as a salad green. Though raw kale is very tough and bitter, these qualities can be massaged into submission with a healthy dose of dressing. When making a kale salad, it's important not to serve it right away and instead let it marinate in the dressing so that the tough texture wilts and tenderizes.

Massaging the kale by hand, in a motion similar to kneading bread, speeds up the process, as does shredding it. Chef Edwards' favorite kale salad uses his grandmother's Sicilian method: He first steams the kale, then drains and squeezes out the water and tosses the greens with olive oil, lemon juice, garlic and salt. "It's not crisp crisp, but it's got some substance and it's a little chewy," he said. "It's just a really refreshing summer salad that's perfect for the summer."

Raymond's (101 E. Ridgewood Ave., Ridgewood) has a delightful Tuscan kale salad that tosses finely shredded kale with a light vinaigrette, studded with pickled sour cherries and crunchy pistachios and topped with whisper-thin shavings of pecorino. The salad brings together sweet, sour, bitter and umami flavors in an addictive combination. Houston's (The Shops at Riverside, Hackensack) makes a similar salad with shredded kale, crushed peanuts and grated parmesan — and it's offered as a healthy substitute for fries. Never one to miss a bandwagon, Cheesecake Factory (also at the mall) serves a kale salad as well, though its version is not quite as healthy. The salad comes with cranberries, apples, Marcona almonds and green beans but is tossed with a buttermilk dressing — not very heart-friendly.

Organico (495 N. Franklin Turnpike, Suite No. 1, Ramsey) understands the nutritional advantages of kale and uses the earthy, chewy green in place of lettuce in most of its sandwiches, like the organic roasted chicken sandwich on sesame sprouted bread or the organic avocado sandwich. Organico is also one of several natural food stores in the area that offers juices with kale, like the mixed house juice with carrot, apple, beet, kale and celery. Kale imparts a sharp, somewhat bitter taste when blended or pressed into juices and smoothies, but the same flavor also makes the beverages taste extra fresh and healthy.

At Healthway Natural Foods (35 Riveredge Road, Tenafly), juices and smoothies with punchy names like Tenafly's Green Machine combine kale with other nutritious fruits and vegetables, like dandelion greens. The shop also offers a kale smoothie with acai purée, blueberries, spinach and apple juice. "The blueberries and acai have a very strong berry flavor so they really mask the kale," said Khalid Mansoor, health specialist at Healthway Natural Foods. "You don't really taste the green as much in it because the blueberries and acai overpower the taste of kale and spinach."

The sweet and fruity flavor of the smoothie makes it a great choice for kids or picky adults. Additionally, Healthway offers its own version of the ever-popular juice cleanse, featuring an all-green, kale-heavy juice. Natural Way Café also sells several kale-based juices and smoothies.

For raw food enthusiasts, grocery stores like Kings, Whole Foods and Market Basket sell Brad's Raw Chips ($7.99), which are dehydrated instead of baked and seasoned with flavorful raw, vegan "cheeses" and other spices.